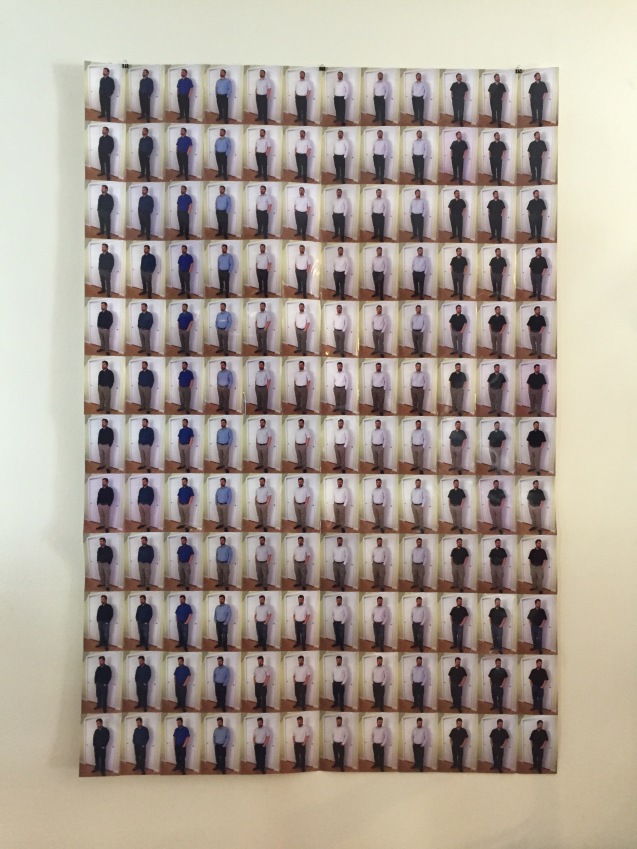 This photoquilt, composed of a series of self portraits, is a follow up to Pickles Are Gross from 2009. Like  Pickles, this quilt is composed of 144 photos — a gross — each with a slight variation from the previous. In You’re Not Going To Wear That, Are You?, the photos include every combination of twelve shirts and twelve pairs of pants. Additionally, the subject is looking in the direction of the placement of the photo.  For example, in the top right photo, I’m looking up and to the right.

This piece is unique in that it took longer to take the photos than it did to sew the quilt together. For each pair of pants, I changed my shirt, set the camera timer, and struck a pose. I repeated this for the next shirt, the next, and the next until I had posed in all twelve. Then I repeated the process for eleven more pairs of pants. The photos were taken over two days which was a surprisingly exhausting schedule. In fact, I almost gave up after the third pair of pants, but I saw it through. But didn’t go shopping for a new shirt the rest of the year.

This quilt was displayed along with Ohio Star: State Fair at the 2016 Ohio State Fair, where it won the McConnell Art Center Award.

Detail of You’re Not Going To Wear That, Are You?